Songwriter Michael O'Meara's richly textured voice resonates with integrity. He has been down these tracks. He has experienced the virtues of the American tapestry. O'Meara articulates, in music and song, our shared hopes, dreams, ideals, and the memories of places past and friends long gone. Join Michael and some of Gainesville's finest musicians at the beautiful Heartwood Soundstage for the official release of his new album, The Right Track. 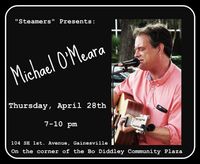 A Story to Tell

Michael O’Meara was raised primarily in Brooklyn and the East Village of New York. At around thirteen he read “Bound for Glory” by Woody Guthrie and without knowing the first thing about guitars or music set his cap to accomplishing playing the songs that inspired him. These consisted mostly of the early and later folk artists such as Pete Seeger, Cisco Houston, The Weavers, Ramblin Jack Elliot, Odetta and so many others.

Michael started playing in Greenwich Village in the early Eighties at places such as Gerde’s Folk City and also along MacDougal Street with some of the Fast Folk crowd and Dave Van Ronk. He by this time was working on trying to write and craft his own songs. He then left New York City after a stint as an iron worker on the Brooklyn Bridge and printing fake headlines in Times Square. He headed out west and ended up in Grand Junction Colorado. He opened for Dave Van Ronk there as well as played in numerous venues.

Michael has lived in a few other places before arriving in Gainesville, FL in 1993 such as San Francisco, Bisbee, AZ and Westport, CT.